Greg Kwiatkowski, a Chrysler winged car aficionado, is always on the lookout for Chrysler racing parts from the 1969 – 1970 era. In January 2012, he attended a swap meet in Mt. Clemens, Michigan, and saw an Aspen-bodied race car on a trailer. Some of the framework and pieces under the body were clearly from Nichels Engineering, the company which transformed Chrysler products into racecars for the various “stock” circuits in 1969 and 1970.

What Greg had found were the remains of a real Dodge Charger Daytona. At a swap meet.

In fact, some parts on this car looked just like the parts on the “200 MPH” #88 Chrysler Engineering car Greg already owned and was restoring. To the untrained eye they might not mean much but to someone doing an accurate restoration on one of these cars, things like brake parts and steering gear are vital. The seller wanted $5,000 for it and said he had gotten it from an estate sale in Owosso, Michigan. Greg bought it. 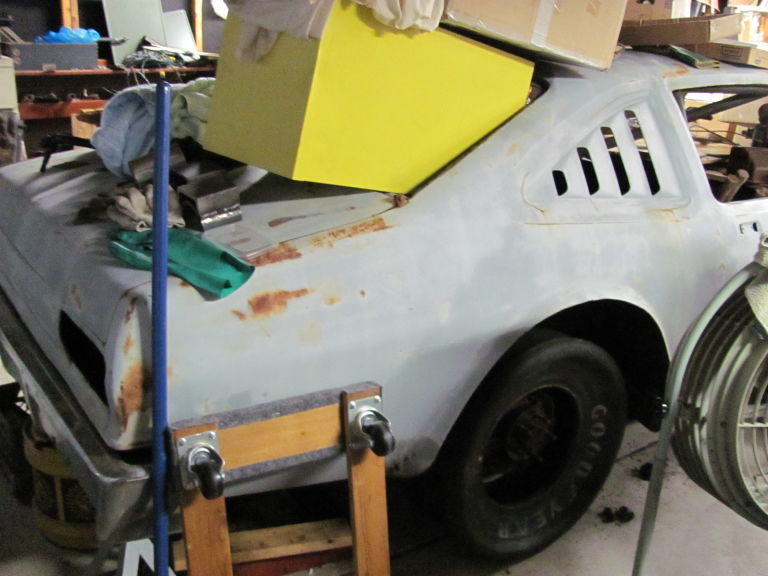 The current state of the Charger Daytona
Courtesy of Greg Kwiatkowski

Curious about the car’s story, he began digging. A man named Doug Dempsey, who researched racecar history, told Greg the car was first owned by a racer named Bay Darnell. Doug Schellinger, the owner of Ramo Stott’s Superbird and a winged car expert, told Greg that the “Aspen” he bought was once configured and raced as a Charger Daytona. It seemed unbelievable that Greg just happened upon another winged car with a racing pedigree – without knowing it when he made the purchase – but research backed it up.

Greg and the others in the community began digging for photos of the car earlier in its life and by finding clues in the photos, the story of the car can be traced from Nichels Engineering to Greg’s garage. The car started out as a 1968 Charger and was sold to Darnell in 1970. Greg found Darnell and spoke to him. Darnell described some of the modifications he had made to the car when he got it from Nichels – things still on the car today.

Darnell told Greg that when he had the car, he painted it Hemi orange and raced it as a 1969 Charger. Darnell talked Gary Bettenhausen into driving the car in a USAC race at Pocono in September, 1971. He reconfigured the car as a Daytona, which meant the addition of fender scoops, a nosecone and a wing, along with a few other parts. During the winged car era it was common for the more pedestrian Charger to simply be upgraded to a Daytona by the addition of the aero features. In fact, most of the cars raced as Daytonas were merely 1968 or 1969 Dodge Chargers which had been fitted with the parts to turn them into Daytonas. 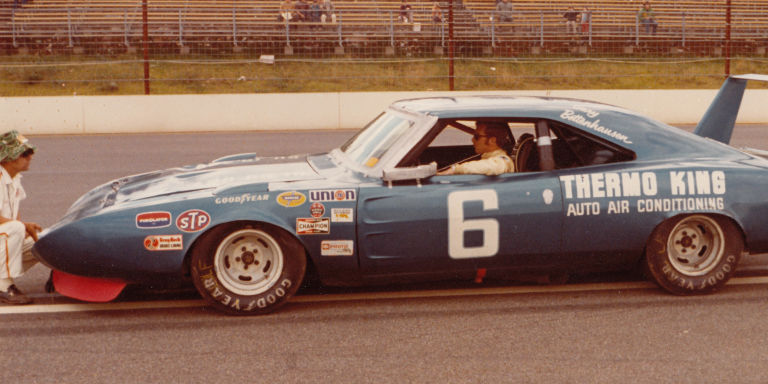 Greg found pictures of the car with Bettenhausen behind the wheel, painted blue, sponsored by Thermo King. Interestingly, photos were taken before and after qualifying and they show a difference in the paint scheme. The front air dam was painted red for the race.

Darnell then sold the car to Harry Cooper. Greg found a pic taken at an auto show with the car wearing some fancy stripes and the number 17. Cooper decided to race the car but it was no longer legal to do so in its 1969 model year configuration. Cooper removed the wing and the nosecone and installed the front clip from a 1970 Charger. The stainless A-pillar covers remained as did the rear window plug. Minor details like this were often overlooked in other circuits. Cooper painted it lime green.

A year later, Cooper re-bodied the car as a 1973. He painted it purple and raced it for two years but didn’t find much success with it. In 1975 he sold it to John from Owosso who would leave the car behind in his estate. 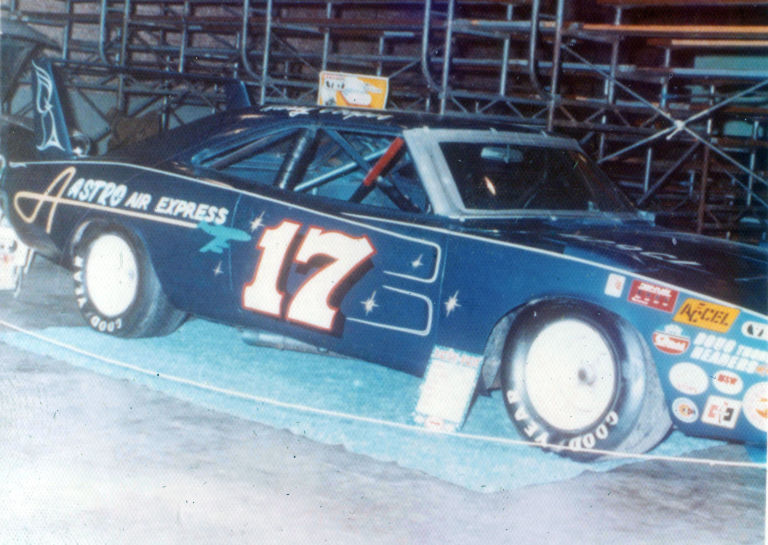 John thought the car still had a future in racing, so he re-bodied it as an Aspen. The frame was too long for the body so he shortened the frame behind the seat. Around this point, the job was abandoned. When Greg bought the car at the swap meet it was not finished. But he didn’t care. He didn’t want an Aspen – he merely wanted the Nichels Engineering racing parts. With them, he could make great strides toward rebuilding the Chrysler Engineering car properly.

After learning the history of the car, Greg decided to not use the car as a parts car. He is using it as a reference as he restores the Chrysler Engineering Daytona but he might sell the car when he is done with it. Or, he might restore it. Either way, next time you are at a swap meet be sure to check the parking lot out carefully. For all you know, there could be a rare car with a racing pedigree for sale, hiding in plain sight.

Steve Lehto is a writer and attorney from Michigan. He specializes in Lemon Law and frequently writes about cars and the law. His most recent books include Preston Tucker and His Battle to Build the Car of Tomorrow, and Dodge Daytona and Plymouth Superbird: Design, Development, Production and Competition. He also has a podcast where he talks about these things.