For years, I have seen click-bait images of a yellow Mercedes W115 parked high above a city in Spain. The caption was always something mysterious, like Abandoned Mercedes showroom or Haunted factory in Spain but as is the norm, the reality is far less exciting. Regardless, this yellow Mercedes that hung in a gorgeous industrial building with gigantic Mercedes lettering on the side has finally had its story told, as it tumbled to the ground. 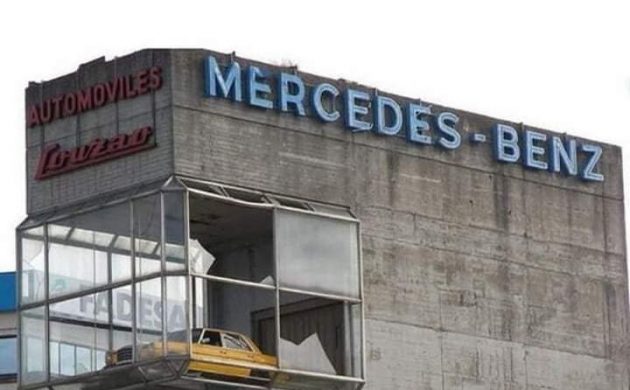 First and foremost, I think it’s a shame this building was lost. From what I can discern from Google Translate, this is the former Louzao Mercedes-Benz showroom in the city of Coruña. I sincerely hope someone grabbed the priceless factory lettering from the sides of the building, but I doubt it. This type of brutalist architecture is rarely seen anymore, especially one housing a glass-ensconced showroom.

The internet chatter indicates that the Mercedes was just a shell – no engine, transmission, or interior, nor were there any electrical components left inside of it. The owner seemingly had a connection to the dealership and owned a similar car, but used this one for the good parts and left it in the building as perhaps a tribute to better days when a grand Mercedes showroom was sustained by the local economy.

Although some attempts were made by the demolition company to save it, no one came forward; after all, beyond nostalgia, who is going to want an empty shell of a Mercedes, long exposed to weather? Regardless, I still find it sad to see a car that for so many years had the best view in town reduced to one more pile of rubble; sadder still to see the loss of a showroom the likes of which we’ll never see again.